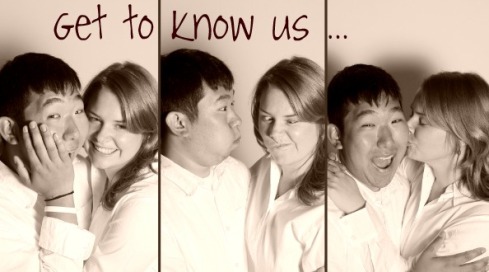 I made a graphic. It’s fun, I had an extra 10 minutes on my hands, and I thought hey — lets get this party started by playing with fonts and saturation levels.

Anyway — onto this week’s “Get to know us.” Enjoy friends.

Day 25: Five facts people may not know about us

So as I sat down to write this list, I realized that the first things that came to mind, I’ve already shared on this blog. I wanted to make sure that this list was of things you may NOT know, as opposed to embarrassing things that you probably could have guessed. Like that I love comic books, wore capes around as a kid, collected Magic: The Gathering cards, and played Warhammer. While those are all pretty embarrassing, they’re predictable, or at least when you read them you’re thinking, “ah, that makes sense.” So here goes:

1) During my first month of life (guestimation) I was orphaned on the steps of a church/orphanage in Seoul, South Korea in a basket with a note displaying my name (Lee Il Sun) and my birthdate. They also found a necklace with a half of a medallion on it. I’m still in search for the person with the other half. … okay, so the last part didn’t happen, but the rest is true.

2) When Apple/Steve Jobs introduced the world to the iPhone back in 2007 I thought it was the stupidest thing ever. I remember saying, “I wouldn’t want my music player and my phone to be one device. I like having them separate.”

4) My mother always loves to remind me that as a kid she could feed me just about anything and I’d eat it up. Veggies, fruit, you name it. If it’s something I “get through to make it to the good stuff” now, I loved it then. According to her, my favorite foods as a child were beets and pomegranates.

5) Prepare yourself for this one. You’re going to stare at this and maybe read it over again to make sure you read it right. In my freshmen year of college, I came to school with NO cell phone, no TV and NO computer. I didn’t have a computer until my sophomore year, and a TV and cell phone didn’t come until my junior year. It was a brave new world out there when I discovered technology and realized the amazing adventures we would have in the years that followed. Oh the places we’d go.

1) I was the editor-in-chief of my high school yearbook staff. My friends called me “Chief” for short. And I totally ate it up. I thought I was on my way to claiming a Pulitzer.

2) When I was 8, I owned a Michael Bolton concert VHS tape, watched it on repeat, and performed my own version of “When a Man Loves a Woman.” Seriously. My dear parents exposed me to that shenanigans.

3) For a few short years, Charlie Sheen was my cousin. Winning! Yep, the crazy guy from Two and a Half Men. He married my cousin Denise. You know, Denise Richards? Her mom was my mom’s older sister. I can’t make this stuff up folks.

4) I’ve been to three — count ’em — three Backstreet Boys concerts. The most recent one was in 2005 when their newer album Never Gone came out. Don’t remember that one? No worries — neither does anyone else. But I do. And I loved it. I’m sure by now you’re beginning to question my taste in music. Don’t worry, I do too.

5) I spent the majority of my childhood in Maryland. I have not spent my entire life in the Midwest. *gasp* I started kindergarten out there, and didn’t come back to Wisconsin until I was in 5th grade.