Over the last 3 months I (Erick) have been working on a conference for Cru called “Legacy.” Legacy has been a conference brought to life 3 years ago by Adam Go (EFM National Director with Cru). The goal was to be able to have a place in the Upper Midwest Region of Cru to gather what was then the beginnings of EFM (Ethnic Field Ministries) movements and have a place for them to gather and learn and grow in their faith with the unique lens of their ethnic identity.

After taking over director responsibilities from Adam over the summer I started off on a journey that I wasn’t sure I was going to be able to do. For the conference to have the impact that Adam and I (and many others) had been praying for God was going to need to show up in big ways.

I began by praying. Asking God what I should be asking for. Number of students to attend. Staff to come alongside me in the planning process. Content. Speakers. Everything.

One of the biggest things that keep coming to my mind as I prayed was a desire to have a healthy mix of ethnic minorities represented at the conference. Then a dream began to come into view: What if we had students that represented all of the EFM movements? Epic, Impact, Destino, Nations, Design. Even though I knew that we didn’t have all of those movements happening in the Upper Midwest I knew there had to be students that would identify with those movements and that maybe we could get them to Legacy.

Another thing that God kept challenging me to was to see a diverse group of people “up-front”. I wasn’t sure how I was going to accomplish this, but began praying that God would “make it happen.”

As the planning went on and the conference dates grew closer and closer something became abundantly clear. God was on the move. A week before the conference I had a Hmong pastor from St. Paul, a black pastor from Milwaukee, a latino Destino staff all coming to be the speakers. I had an Indian woman emceeing. A white man leading worship. A bi-racial woman facilitating a panel. God put all of the pieces together so beautifully.

We also had students from every facet of EFM and I was so in awe of God for how mightily He moved in students lives to get them to come to the conference. 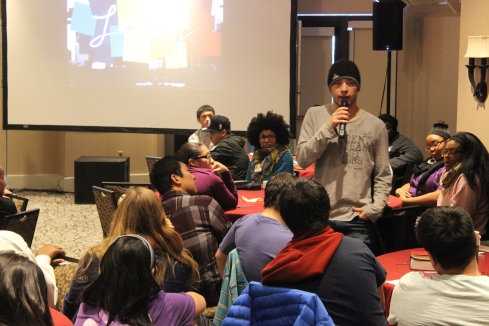 As the conference began it was clear that God was just going to continue to make His name known to all of us. Speaker after speaker a constant theme was being tied about God’s creation and what that means for us today. But nothing repeated. Nothing seemed out of place.

A few takeaways from the conference that I had were from the first talk of the conference where Pastor Will Branch talked through Genesis 3:11 and had us all write down things that we have heard and/or believed were true about ourselves relating to our race/ethnicity/culture. He then rolled through God saying, “Who told you you were ________.” And then proceeded to walk us all through the healing process of “God created you and said you are very good. So stop believing the ‘blank.'”

We also had a panel of all of the speakers, emcee and myself and got the chance to answer some harder questions about our own ethnic identity  and to lend our perspectives toward our own experiences. We also opened it up to the audience (always dangerous territory) and got to answer some of the tougher questions that were on students’ minds.

There was also a beautiful moment where our worship leader Joe Hanson led us through a time right before we worshiped to “Revelation Song” that we were glimpsing a moment of heaven in the room as a diverse multitude gathered to worship God singing “holy, holy, holy is the Lord God almighty.” It was probably the most moving worship moment I’ve had in awhile.

The conference was full of moments like this. I’m so thankful for everyone who made it possible. So thankful that God gave me the opportunity to experience it and to have been used by God to lead it from beginning to end. God expanded my heart for seeing my life through a culturally sensitive lens and I’m excited for the dividends that is going to pay down the road.